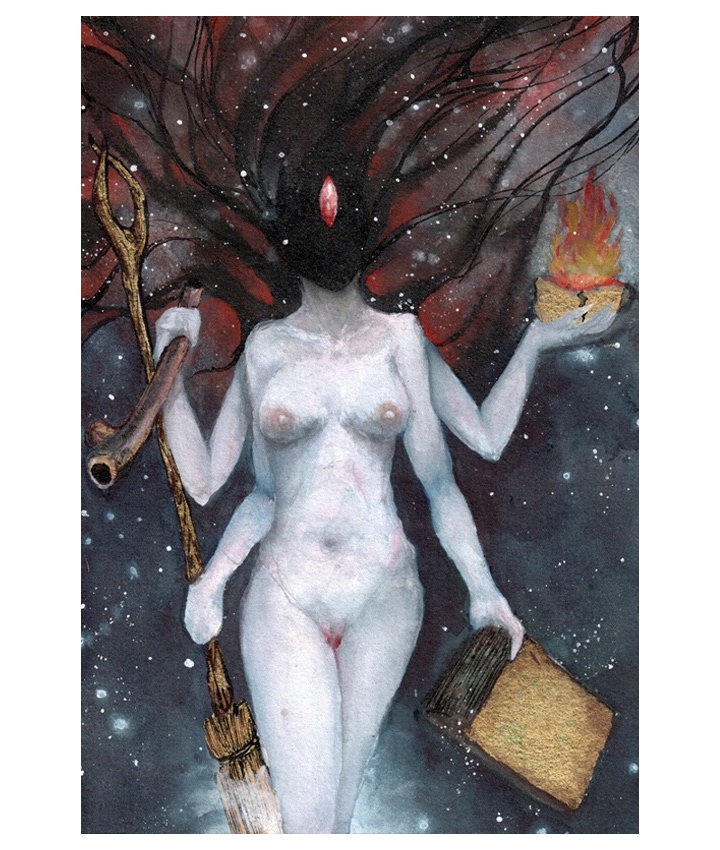 The Call of Akarana

“A witch is born, and not made;
or if one is to be made then tears must be spilt before the moon can be drawn.
For the Lady chooses whom She wills to be Her Lover,
and those whom She loves most She rends apart before making them Wise.”

The fiery moon opens the sky, it weaves with its hair the sacred interbreeding of the children of shadow. And from the shadows we were born, baptized by the rain, named by the stars... As we walk, our feet create the furrows borning rivers. They flow there, out of time, in weightlessness, inside these contrary movements which make the Moon descend to the earth.

Obsidian-faced goddess, look at me, Your priest / priestess aflame with the desire to know You!
O You who are the unique center of all devotion, I offer You my blood, my seed, my saliva and my tears.
You who bathe in the dregs of the world and who receive all the attentions, I venerate You,
Reciting these words not inscribed in the stone but in the most secret cave where shines the sacred flame that You have kindled.

Black Venus drowned in the oceans of midnight, You who howl, fury of the stars,
You set the worlds on fire with Your desire and Your love...
Please talk to me!
By all that is holy and that I deny, I implore You!
By all that is profane and that I bless, I invoke You!
Talk to me!

"I am the Queen of the Evening, and I sing in the morning, I am the fleeing lover, the Goddess of the Powers of the Night. From Me the pretentious will have only the harsh taste of the blade but I will lovingly embrace the lowly in their last breath. To the one who stands upright in front of my cutting edge and who plunges into my Abyss, to the one who faces the world and death, I offer eternity...
You will know me by this name: Akarana! Receive it like a sacred engagement promise, a most obscene alliance!"

Queen of the Sabbath, Lady of the Mountain, invite me to your frenzied dance,
You have revealed Yourself to me under the name of Akarana, but You are undoubtedly the One who is so desired, the One who has a thousand names!

Oh Akarana, may I be worthy of these gifts, crown me with Your glory!

Lady of Elphame, Goddess of verdant kingdoms, mother of the Sorcerer's Blood, You who preside over all magic, who enchants the most powerful and devious the most valiant, be favorable to me! Primal strap, ancestral Wyvern, Your ripples make the cosmos tremble with pleasure in ecstasy and death. Dark matter below any manifestation, few have lifted the veil of Your stars. You preside over Time and align the 12 to your desires!

Our Lady of the Universe, whose starry face bears the alchemical carbuncle, come to my sacrifices!
Sevenfold is Your hand: root me out of ignorance!
Sevenfold is Your star: illuminate me with your sacred fires!
Sevenfold is Your tongue: awaken my senses to your wisdom!
Seven are the sacred Vowels, emanations of Your power.
Formed by Your tongue, seven are our gods who rule the universe, the Witch Heptarchy.
Radiant, You are the Throne before which Your legions kneel.
And among them, seven great kings bow down before You, surround and keep the Throne of Your Mystery!
Seven, seven, seven are Your children, let their face turn to me, oh Akarana!

Goddess of the night, Wild prostitute of the deserts, you wander in the cemeteries, feeding on the residues as the people have fed on the Manna.
Feed on me, devour me!
I, who am only a ghost among the others so that I may be reborn in your womb, initiated into the Mysteries!
Reaper in the field of possibilities, receive my praise, drink my blood and may Yours fill the sacred cup of initiates!!
Mother of abominations who has no parentage, yet you are the daughter of all that will be!
And, because you have descended, you are the highest there is, Queen of the Stryges!

Screaming Your name, crying Your glory, Eternal Virgin, White owl with protruding talons, whose milk floods creation, Mermaid crowned with Gold, Azure and Horizon, Light among the stars, You guide the Magi to the place of the birth of your son, hypostasis of our Master, son of Your dawn, Morning Star ...